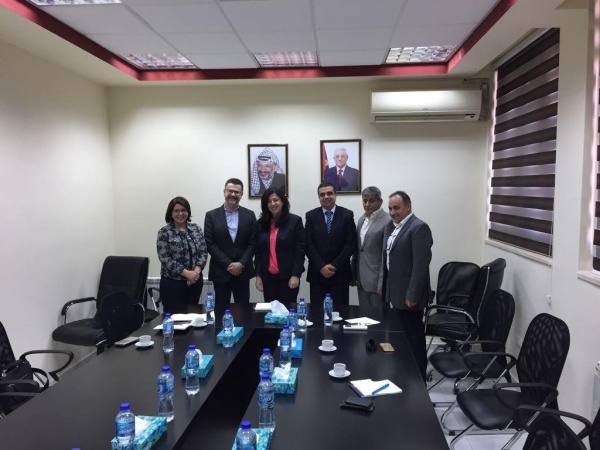 Ramallah - on April 19th, The Minister of National Economy Abeer Odeh along with the Palestinian Shippers Council represented by Hani Qurt ;Chairman of the Board, Yousif Safadi, Vice President, Maha Abu Shusha, Wael Hijazi and Executive Director of the Council Dr. Ihab Barghouthi held a meeting to discuss trade cost reduction and trade facilitation methods.
The minister raised the issue of the need to organize the import and export in Palestine and focus on the need to continue cooperation to deal with the problems experienced by the Palestinian trader, in import and export through various borders mechanisms to reduce the costs of trade, which will be reflected positively on the Palestinian consumer.
she also verified that the activation and acceleration of the operation of dry ports and industrial zones and the role of the Council of specialized shippers, and ways to pressure to allow Palestinian trucks to enter the Israeli market.
she reviewed the problems of companies at the crossings (Al-Karama crossing, Beit Hanoun checkpoint) and the need to operate containers system.
She made an extensive presentation on the workshops and meetings organized by the Council in cooperation with experts on facilitating trade, clearance and shipping and ways to benefit from shippers in import and export.
The deputy chairman of the council reviewed the problems of trade through the Beit Hanoun checkpoint, where he obstructs the Israelis and does not activate the scanner, claiming that it is not operating for security reasons. Explaining the suffering of the Gazans is exacerbated by the unjustified measures and requested work to overcome the obstacles and give the Palestinian National Authority full role.
Wael Hijazi addressed some of the problems faced by the Palestinian merchant during the shipment through Al-Karama crossing, pointing out that the improvement and impact of the low cost on trade after the Hashemite Kingdom of Jordan installed and operated the scanner as well as the Israelis, which led to an increase in the speed of crossing trucks through the bridge. He added that there is a problem issue that needs attention and solutions, which is container trading, where the crossing of containers through the bridge is handled according to special procedures.
Maha Abu Shousha praised the efforts of the Ministry of National Economy and its large projects, despite the reduction of 30% by donor countries. The ministry is exerting efforts in establishing dry ports, building and activating the industrial zones and concluding agreements with neighboring countries to overcome obstacles and facilitate trade.
It is worth mentioning that the Palestinian Shippers Council is the main body representing the import and export sector in Palestine. It was founded in 2006 as a non-governmental organization that provides technical and legal support to all Palestinian traders working in the field of import and export. Members of the Council receive full technical and legal assistance and through the Portal they receive updated information on import and export procedures, allowing them to make the right decisions and choose the best ways to complete the operations quickly and at the lowest cost 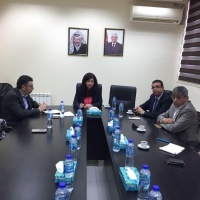