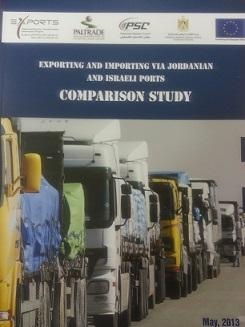 In the reality of ongoing major social, economic, and political challenges, considerable investments will be needed to continue the rehabilitation initiatives launched years ago to modernize and rebuild Palestine’s infrastructure. Effective infrastructure is a prerequisite for sustainable economic development, which is a fundamental cornerstone in the establishment of a viable Palestinian state in the near future.

Despite the efforts of the Palestinian private sector to grow independent of Israel and the support that all economic sectors receive from the respective ministries, Palestinian businesses are permanently confined by the regulations of the Paris Protocol, which constrains the movement of individuals and limits the access of companies to needed resources.

This report outlines and explains the hardships which Palestinian importers and exporters encounter when they import from and export to foreign markets as a result of the full Israeli control of all national borders. The report examines two major routes for Palestinian products: namely, via King Hussein Bridge (KHB) and via the major commercial crossings (CCs) and then through Israel. The report highlights the mechanisms through which Israel has been macro- and micromanaging the Palestinian economy through the imposition of rigid procedures and various obstacles which increase the cost and time for conducting trade.  For instance, a strike by the port workers in Ashdod pushes Palestinian goods to the bottom of the line since preference is always given to Israeli products and can cause the Palestinian private sector a loss of millions of shekels. Thus, strikes by Israeli customs, ministries, and other bodies can bring the whole Palestinian economy to a halt. In addition, the majority of the industrial parks that have been planned to be built or developed in and around Palestine have suffered the consequences of the Israeli mismanagement of Palestinians’ daily life. The lack of access to the international market due to the restrictive measures imposed on import licensing of raw materials has delayed the launch of investments such as industrial parks and has discouraged the Palestinian diaspora from expanding their overseas businesses into Palestine.

The report concludes that the entire supply chain depends more heavily on Israeli factors than on Palestinian ones. On the one hand, there are the Israeli customs agents and freight forwarders who benefit from a relatively easy access to information about and legal recourse on their counterparts (for example, shipping lines, customs, port authorities, freight insurance agencies, etc.). On the other hand, there are the Palestinian traders who face a lack of information on and knowledge about importing and exporting procedures, tariffs, and other duties, and the double but incomplete legal framework for customs issues. This discrepancy creates a substantial asymmetry of information between Israel and Palestine. Therefore, the objective of this report is to collate information about the needed procedures, documentations, and certifications and the required cost and time to obtain them into one single document that is divided into chapters and concentrates on certain countries.

The report also looks into the matter that Palestinian cargo can only travel on cargo planes at limited times and on limited dates, whereas Israeli cargo can travel on both cargo and passenger planes. The report clearly highlights the difference in cost when cargo travels through Israel and through Jordan. This excludes Palestinian traders from the cheaper rates and better connections offered by passenger planes. If used, passenger planes can expedite the transportation of goods and reduce the cost for importers, exporters, and end-users. This has become apparent when applied to the Jordanian route, and the difference in cost has encouraged Palestinian exporters to use Queen Alia International Airport (QAIA).

In addition, the report emphasizes the major obstacles that exporters face when using both the Israeli and the Jordanian routes and provides a cost comparison.

Eliminating the back-to-back system at the border crossings will definitely reduce transaction costs, damages, and time especially if implemented at KHB. Exporters will no longer be restricted to a certain pallet size, and the use of containers will reduce damages and exposure to sun or wind, and if coordinated properly with ports, it might also reduce the storage and overnight stay.

The report discusses the varied stops or stations through which Palestinian exports have to go before they reach their final destination and explains through diagrams and tables the differences in cost at each station with detailed procedures, obstacles, and recommendations.

Under the current circumstances, the KHB option has in many cases become unattractive and cost ineffective, since the obstacles that Palestinian products face on this route sometimes exceed the obstacles present on the Israeli route, including long distance travelling, no transit agreement with Jordan, and change in temperatures which mainly affects perishable produce. On the other hand, if the flow of goods and the volume of trade are increased significantly and direct negotiations with shipping lines, cargo planes, transporting companies, and the Jordanian customs, port and airport authorities take place, this route will become competitive as an alternative for some of the destinations for which the Israeli route is currently used.

Having said that, containerizing KHB will definitely eliminate some of the impediments and reduce the cost, time, and damages at the bridge by nearly 20-30%.For example, the average time required for a container with a minimum of 15 pallets to be scanned is around 5 minutes in comparison to 3-5 minutes of loading/unloading time that is now needed for each pallet considering the current Israeli setup. In addition, each container is scanned whilst loaded on a trailer and requires no additional loading or unloading.

Containerizing Palestinian products in Palestine, either at the exporter’s warehouse or in a logistic city or dry port, will also reduce time (load/unload), damages (loose products), temperature exposure (cooling), and administration at the port. This might also decrease expenses at KHB and the Aqaba Logistics Village (ALV) by at least 200-400 JD depending on the container size and the type of products.

The enclosed figures and calculations might vary from one shipping line to another and since shipping depends on a number of factors such as oil prices, route, frequency, etc., the values included will change immensely and the longer the route becomes the less cost effective it will be. On the other hand, it was discovered that exporting to the majority of European destinations is more time and cost effective through the Ashdod/Haifa route. Aqaba, however, offers a competitive advantage for destinations in the Far East.

In conclusion, the introduction of a scanner at KHB and the establishment of a logistic city or dry port in Palestine will definitely make the Aqaba route more attractive and possibly more cost effective, provided major elements of the chain supply are tackled and obstacles are fully removed. This has been proven through cargo shipment, where Palestinian products can travel on passenger and cargo planes through QAIA, unlike the Israeli route that restrict products to cargo planes only.

to read the full article please fill the membership form.