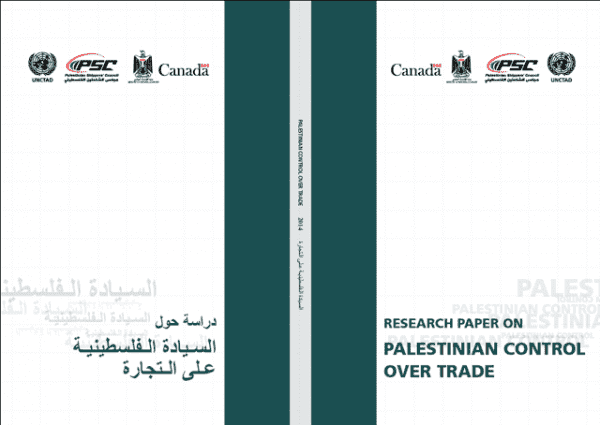 The Paris Protocol is considered the main framework for economic cooperation and relations signed between the Palestine Liberation Organization (PLO), representing the Palestinian people and the Palestinian Authority of the West Bank and the Gaza Strip, and the Government of Israel. The Protocol formulates Annex V of the Oslo Agreement signed in 1993, which, in addition to other parts and annexes of the Oslo Agreement govern the economic relations between the two parties. This study will explore the current trade dynamics, provide comprehensive analysis of the Paris Protocol’s trade related aspects, requirements for Palestinian control and sovereignty on trade, and the importance and requirements for a separate customs territory. This study, therefore, will bring recommendations and solutions towards establishing a separate customs territory and enforcement of Palestine control on trade, by focusing on actual trade impediments to fulfilling the main underlying concepts of the Paris Protocol.
The spirit of Paris Protocol which is aimed to change and challenge the characteristics of post-1967 economic regime is clearly stated in its preamble, which indicates: “This protocol lays the groundwork for strengthening the economic base of the Palestinian side and for exercising its right of economic decision making in accordance with its own development plan and priorities”. In signing the Paris Protocol, the Palestinian negotiator had four basic benefits in mind that would accrue on the Palestinian economy and businesses, these benefits, however were never realized due to the aforementioned impediments. These expected benefits were:
1. Free Movement of Palestinian Labor to the Israeli Market
2. Free Movement of Palestinian Goods to the Israeli Market and through Israeli ports and airports to the international market
3. The potential of transforming list A-1, A-2 and B to the Palestinian Tariff Book
4. The proximity of the Palestinian economy to the Israeli economy, under
the concept of a customs union would provide the Palestinian economy with impetus to develop along the same lines.
It is important to note that the Paris Protocol was accepted by the Palestinian side within the understanding of its interim nature, which was not to exceed five years. The protocol has been in force for 20 years instead, with practically
no significant adjustments, and hence does not reflect in any way the economic interests of the Palestinian economy. Unfortunately, also, not withstanding its already time expired nature, the implementation of the Paris Protocol was
daunted by the fact that it was formulated to accommodate, and not to 6 Palestinian Control over Trade deal with the asymmetry in power and capacity of the two economies. This asymmetry was clear in the seriousness in which the Israeli side dealt with the roles of the Joint Economic Committee (JEC), which was to formulate the body for coordination and consultation, as well as a decision making body for amendment of the protocol itself between the two sides. In the meetings of the JEC, the Israeli side took up the position of eliminating the potential for coordination and utilized political arm-twisting to empty this body from its context and to render the meetings and discussions meaningless. Taking all the aforementioned into consideration, it is crucial to conclude that the Palestinian economy, in order to enter into the cycle of development must first start with the process of normalization of the business environment. This will require that the Palestinian business community should be able to enjoy and be part of fair competition, which is currently skewed by the irregularities and the unfair competitive edge of the Israeli trader. This irregularity, which results from higher transaction costs as imposed by the closure regime and the violation of the provisions of free movement of goods from the Palestinian to the Israeli side. Creating such fair competition will help in opening the door for the Palestinian economy to start the process of recovery, on the way to development and increase access to international markets, which will formulate the springboard towards recovery and development. The process
of development requires that the Palestinian government has within its reach the needed trade policy tools that allow it to meet interests and needs. These tools, which formulate an inherent and pivotal component of sovereignty must also be implementable by the government, and therefore will require that the government exercise control on movement of goods, and on border crossings in order to ensure that it can implement policies that will eventually lead to an enabling business environment. The Palestinian National Authority, however, lacked many of the powers sovereigns usually have: it could not decide on trade policy, or even influence the trade policy, since the Oslo Agreement and specifically the Paris Protocol sustained the Israeli trade regime to hold over the external borders (“the customs envelope” in the
negotiators jargon); it made the diversification of trade almost impossible both in imports and exports; a large proportion of the future income of the PNA depended on “clearances” (i.e. on funds to come from the Israeli side who collected them for the PNA), making the PNA, again, more dependent. The Paris Protocol foresaw that the responsibility of revenue clearance would eventually be transferred over to the Palestinian side when the latter’s customs authority was capable of performing the required job, the transfer of this authority was never done. Finally, although the agreement instituted the establishment of a monetary authority and provided for a tool of instituting 7 public debt (Article IV), in practice Palestine was refrained from this. Thus, trade policy, fiscal policy, monetary policy and other economic policies were not available to the PNA for the interim period.

This study is only availabe for PSC members, if you want to read the full article please fill the membership form.